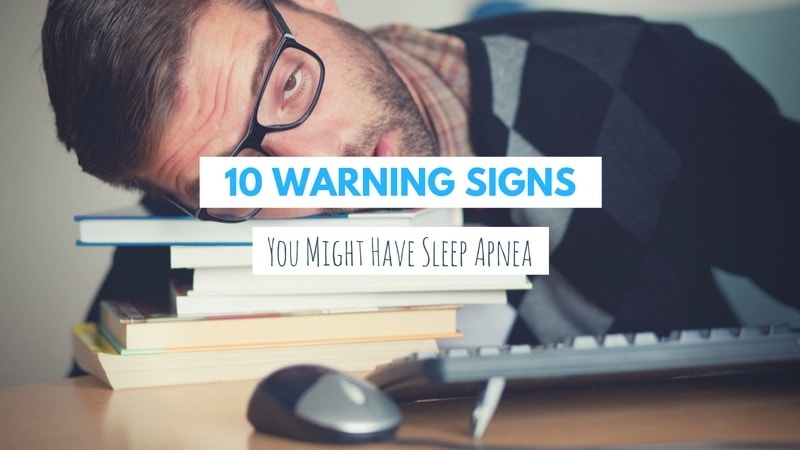 There are many jokes, TV sketches and more dedicated to snoring because, let’s face it, snoring is funny. It sounds funny anyway. When you look at the potential causes of snoring though, namely sleep apnea, the reality might be less humorous.

Here we explore the signs of sleep apnea, what it is, and what you can do about it. There are ways to manage or treat sleep apnea which means restful sleep for all could be fully restored. Now that’s something the grin about!

Sleep apnea is a disorder through which you have pauses in your breathing during sleep. By pausing we mean your breath may become more shallow or you might “hold” your breath for a period before resuming normal sleep-time breathing. Sleep apnea may be occasional, it might be common and constant and episodes vary in length from a few seconds to more than ten seconds and beyond.

You don’t actually hold your breath in your sleep of course, the blockage of your airway occurs as a result of soft tissue and muscle located in the throat relaxing, and ultimately collapsing. For some sufferers this blockage may occur as many as thirty times (or more) in an hour. After each episode you breathe normally and this sudden switch back to “normal” breathing is when you would make a snort, snoring or choking-like sound.

Individually these signs and symptoms may mean very little however if you find you are suffering from a number of these or have any concerns it would be wise to speak to your GP.

You may not hear your snores however anyone else in the room / house will. You might actually find that your snoring is loud or disruptive enough to wake you from your sleep. If your ribs are snore from being elbowed by a partner in the hope that you will stop, or if you are being woken and being told to turn over due to your excessive snoring this might be the first sign of sleep apnea.

It is important to remember that snoring alone is not the same as having this disorder however it pays to be mindful.

Feeling a low may be caused by ongoing fatigue which is caused by the disturbed sleep you may be experience. Depression and sleep apnea have also been linked. Depression is serious and is a long term condition which may well require treatment. Anne G. Wheaton PhD, the lead author of a CDC study on the connection between sleep apnea and depression certainly believes that the symptoms of sleep apnea may be linked to depression. Talk to your GP if you are feeling down or suffering any of the signs of depression and find these don’t get better after a decent night.

You wind down before bed, go to sleep at a reasonable hour, get your full eight hours in and still you wake up feeling like you’ve just finished a night shift at work. That hardly seems fair. This is common in people with sleep apnea.

4. Fatigue Throughout the Day

Disruption of your proper sleep pattern will of course affect how rested you are and this tiredness may well continue into the day, whether you are aware of being disturbed at night or not. Being over-tired, not sleeping well and general fatigue during busy times is common however when you find this happening over a longer period and recognise other signs of sleep apnea you may wish to discuss this with your GP.

What does needing a pee have to do with night-time breathing? More than you would think. If during the night you find yourself needing to urinate frequently this could be due to the scientific reactions that occur when your airway is blocked off for a period of time.

When your breathing pauses your heart rate shoots up, the amount of oxygen found in your blood drops and the higher your blood carbon dioxide levels will be. The higher your blood CO2 levels are the more acidic your blood becomes. This results in your heart having to work double time and as a result of this overwork protein is released which in turn instructs the body to get rid of water and salt. This is the short version of course however the fact remains that frequent urination may be a sign of sleep apnea.

6. Gasping During the Night

Not the name of a spooky horror film; gasping during the night is something sleep apnea sufferers deal with after the blockage clears and they breathe normally again. Your body will react instantly and pull extra oxygen in as soon as it is able, resulting in the gasping.

REM sleep is the deep, refreshing and healing sleep we all crave as a decent amount usually means we wake up feeling great. Those with sleep apnea issues don’t tend to get enough REM sleep and research suggests REM sleep is directly linked with having an effective memory.

If you are forgetting things or finding it harder to recall information quickly this might be due to the lack of REM sleep you are experiencing.

This one goes hand in hand with on-going tiredness. If you just yelled at the postman for putting the letters through the door the wrong way or find yourself short of temper regularly first thing this might be one of the warning signs of sleep apnea.

Do you find you have a dry mouth during the night / in the morning? This might be due to sleeping with your mouth open (common for people with sleep apnea who are trying to breathe more oxygen in whilst sleeping).

There are a number of factors which may be some of the causes of sleep apnea or at the very least contribute to it. These include being diabetic, being overweight, drinking and smoking (ongoing as well as just before bed), having a long/large tongue/neck and more. Do any have any of these risk factors? If you have and you recognise any of the other signs mentioned, please speak to your GP.

What Can You Do About Sleep Apnea?

According to the NHS sleep apnea advice page poorly controlled sleep apnea can raise the risk of contracting high blood pressure, the likelihood of accidents due to extreme tiredness, heart attack, stroke and more.

There isn’t a magic cure for sleep apnea however a number of things may make a significant improvement, reducing or eliminating it altogether. Surgery is one (though a last resort and dependant on individual cases), however making lifestyle changes is the most common treatment.

Looking carefully at the signs and symptoms associated with sleep apnea will give you a good idea of what lifestyle changes you can make yourself which will reduce the problem. Losing weight and not smoking or drinking alcohol, particularly before bedtime for example would be changes that could make a noticeable difference to whether or not you suffer from sleep apnea (and snoring, even if you don’t have sleep apnea).

Additionally, there are a number of aids used by people who snore to alleviate the noise such as a snoring mouthpiece which certainly help all concerned sleep better and reduce the number of elbow-in-ribs incidents during the night.

Sleep Apnea is more common than you might suppose. This video featuring Doctor Alexander Salerno may be useful as it explains the condition visually. Being aware of the signs and symptoms and see your doctor who will be able properly diagnose sleep apnea if present and discuss treatment and management options as appropriate.