Find out if snoring mouthpieces work for you! 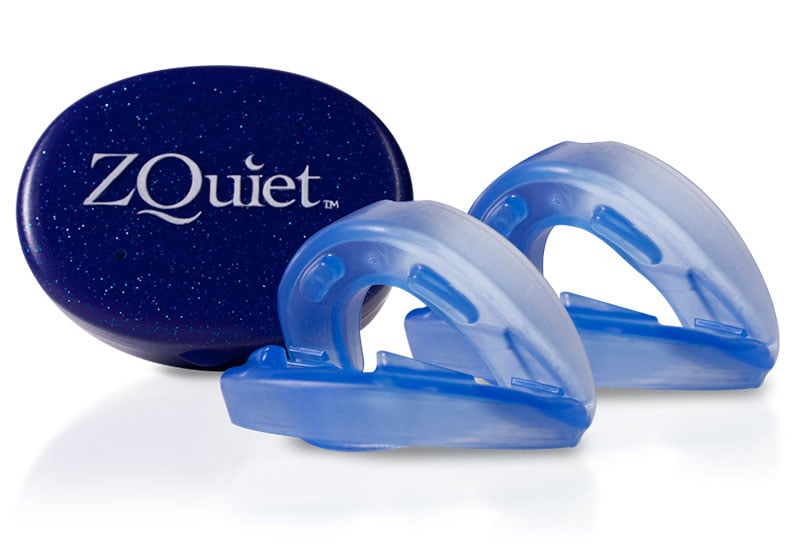 The numerous selection of stop snoring devices can be overwhelming.

A mandibular advancement device (MAD) is a viable option for many patients, but depending on the cause of the snoring, a tongue retaining device (TRD) may work better. Other patients may prefer a chin strap or snoring pillow since these are less invasive.

The zQuiet is a popular MAD that can doesn’t need custom-fitting before use. It allows mouth breathing, which is useful for patients who suffer from seasonal allergies and who can’t always breathe through their nose. It’s also flexible enough to allow patients to talk and sip water. While the zQuiet isn’t as highly-regarded as other devices we’ve reviewed, it seems to be a possible solution for patients whose snoring is caused by tongue and jaw positioning problems, including sleep apnea, rather than nasal issues.

It’s important to note that not all snoring cases share the same cause. Some patients’ snoring is caused by muscle relaxation that causes the jaw to slip into an unnatural position. Other snoring cases are directly caused by tongue and throat positioning resulting in vibrations that disturb airflow. Patients diagnosed with sleep apnea, which involves interrupted breathing caused by throat blockages, also often experience snoring as a side effect. Though these causes are similar, some cases involving tongue positioning are better treated with TRDs, which work to prevent throat blockages and vibrations through a different mechanism.

Patients with deviated septums and sinus problems can also experience snoring, and these cases can be particularly difficult to treat. Allergies can also cause snoring, but these temporary cases are often treatable with over-the-counter medications that don’t require a long-term investment like a MAD. In some cases, a simple change of pillows can help treat cases of snoring, especially when an uncomfortable sleeping position exacerbates minor throat vibrations, but this is uncommon for chronic snorers.

The zQuiet and other MADs work by holding the jaw in a forward position. This prevents the tongue from falling back toward the throat and causing partial blockages that cause snoring. MADs usually work regardless of sleeping position, which is great for patients who don’t always sleep in the same position.

Like most stop snoring mouthpieces, zQuiet and other MADs will likely be completely ineffective for snoring caused by deviated septums and other nasal issues, since these devices only affect jaw, tongue and throat positioning. They also may not be as effective as a TRD for some patients whose snoring is caused by the tongue falling back toward the throat. Patients should consider the source of their snoring before trying zQuiet and consult with a dentist if necessary.

Studies show that MADs like the zQuiet can be very effective in treating snoring and other symptoms caused by mild-to-moderate obstructive sleep apnea. While the zQuiet has not undergone clinical trials, it is similar to MADs that have undergone such trials.

One randomized and placebo-controlled study showed that MADs are a viable option for obstructive sleep apnea patients, but did not show objective improvements in all areas of sleep quality. A MAD similar to zQuiet was shown to be a good option for treating snoring patients with sleep apnea, despite being one-size-fits all. One analysis of various studies showed that MAD effectiveness can vary but can be an appropriate solution for patients seeking treatment that’s less intrusive than continuous positive airway pressure (CPAP).

These clinical trials did not overwhelmingly declare MADs to be effective, but instead suggested that they be considered for patients who meet certain criteria. Again, patients with sinus problems, allergies, or deviated septums should look elsewhere for a snoring solution, as MADs are designed for patients with jaw positioning issues.

Many customers report success with the zQuiet. While it’s not our favorite MAD, it’s a quality product for patients whose snoring is caused by vibrations at the back of the throat. For some patients, though, the zQuiet will be too small. The zQuiet comes in two different bites, but this may not be enough for patients with certain jaw shapes or dental needs. In such cases, boil-and-bite devices or professionally-fitted devices may be much more effective and comfortable.

The zQuiet is also cleared by the U.S. Federal Drug Administration (FDA) since it’s similar to another product that went through the rigorous FDA approval process. While FDA approval doesn’t guarantee that a product will work in all cases, it’s important to look for FDA approval to avoid wasting your money on cheap imitations.

Since zQuiet is a relatively inexpensive product, it’s well worth trying if jaw-related factors cause your snoring. It comes with an inexpensive 30-day trial, too, making it an economical option for patients who aren’t sure what kind of product they want to use. However, while the zQuiet may objectively work, it’s not as comfortable or easy-to-clean as some other products on the market.