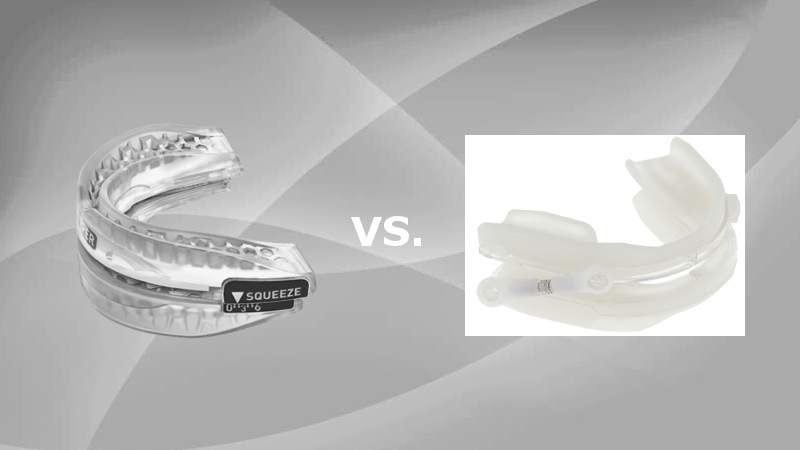 Rather than writing off snoring because almost everyone suffers from it, customers can get their sleep schedules back on track by using a snore guard.

Here we measured two of the devices against one another to determine which one is more appropriate for consumers. The SnoreRx is an American product available in 39 countries over the counter, while the Somnoguard is a European product only available by prescription through a doctor’s office or a medical supplier.

Both the SnoreRx and Somnoguard are very similar in design, with a heated mold technology for a custom fit and a jaw forward design to pull the tongue off the airway while sleeping. They both have a feature that can pull the jaw forward even more, effective for an overbite. This feature isn’t common amongst MADs, so it’s unusual they both have it. However, it increases the efficacy and reduces soreness for users with unusual jaw alignments.

That said, the SnoreRx is far more effective, demonstrating with time and habitual usage a reduction in snoring to the point of near-elimination, while the Somnoguard reports some effectiveness in large-frame men but for very few others. The Somnoguard is adjustable, but the product itself is simply too large for most users.

The SnoreRx and the Somnoguard both have holes throughout the device, a feature that allows one to breathe through the mouth while asleep. This feature is not available in all MADs and is less effective in others, but it is a necessity in case one deals with clogged airways from colds, allergies or other health issues. What may not be a chronic issue to the consumer can be temporary with the introduction of illness or allergies.

The boil-and-bite process is a feature of both guards – they can be customized to the mouth of the user by boiling and then setting the mold. The Somnoguard has a slight edge here, depending on the perspective. Because it is a dentist prescribed product, the dentist can do this for their patient when they pick the device up in the office. However, both can be done in the privacy of one’s home. Therefore, the Somnoguard is a little more flexible, but the at-home process is very easy either way.

One major complaint about the Somnoguard is that it is way too large. Dentists don’t recommend it for women, and even for men who aren’t of a large frame, it is very uncomfortable. It causes extreme drooling and soreness in the jaw. The SnoreRx also causes some soreness, as do all MADs initially, but it causes some of the least pain of any. Both have less soreness than they would otherwise, thanks to the jaw alignment adjustment feature both have, up to 10 millimeters (slightly less than a half inch), which accommodates overbites and temporomandibular joint disorder (also known as TMJ or TMD).

The SnoreRx is the more affordable option at $100 plus $10 shipping and handling. It has a 30-day money back guarantee and a lifespan triple that of most other snore guards – up to 15 months.

The Somnoguard is a little more difficult to price. Only available by a doctor’s prescription, the good news is that it may be covered by the patient’s insurance plan. The bad news is that if it isn’t, prices may vary widely; however, on the Somnoguard website (available in German but translatable), one can get a general idea that it may sell for $170 (approximately 150 euros) in the United States. There appears to be no warranty, which would be complicated due to insurance reimbursements of course, but it does last a bit longer than the SnoreRx, up to 18 months, according to the makers of Somnoguard – users claim it wears out or breaks in far less time.

SnoreRx has near-flawless customer service reports. Some of the complaints about certain aspects of the product often end the review with rave compliments about the company handling returns or answering questions and concerns to keep customers satisfied above and beyond the standard of customer care expected.

Somnoguard is harder to measure; the company is based in Europe and therefore difficult to get in touch with, and customer complaints will mostly go through an intermediary of the prescribing dentist or doctor, the insurance company, or the medical supplier. This intermediary creates a customer service nightmare as the intermediary doesn’t have an easy way to return an unsatisfactory product nor necessarily the motivation to do so.

SnoreRx is well-regarded for its money back guarantee, while Somnoguard doesn’t have one.

It is difficult to find many complaints about the SnoreRx, but most involve soreness with initial use. This soreness is true across MADs unfortunately as the jaw adjusts to the apparatus. The Somnoguard has more and varied complaints. Because it is held together with screws, pieces come off or get lost, making the expensive device unusable. Despite Somnoguard’s claim, it will last up to 18 months, customers say otherwise.

Both have customer complaints that they are more difficult to clean than average MADs.

The verdict in this comparison is that the SnoreRx wins in just about every category. The Somnoguard is incredibly difficult to access, can be more expensive, has no warranty, and just doesn’t rate as effective. The comparison may be a little unfair, as SnoreRx is one of the best on the market, and Somnoguard falls short in just about every regard. Somnoguard claims to last longer, but customers say it isn’t so. In most situations, SnoreRx is the choice. The exception is if a doctor prescribes the Somnoguard and the insurance plan covers it – and the user is a male with a large jaw. In all other cases, SnoreRx is the winner in this face-off!

The Best Snore Guard is SnoreRx, I’ve Tested Them All

SnoreRx is The Best Product For Snoring