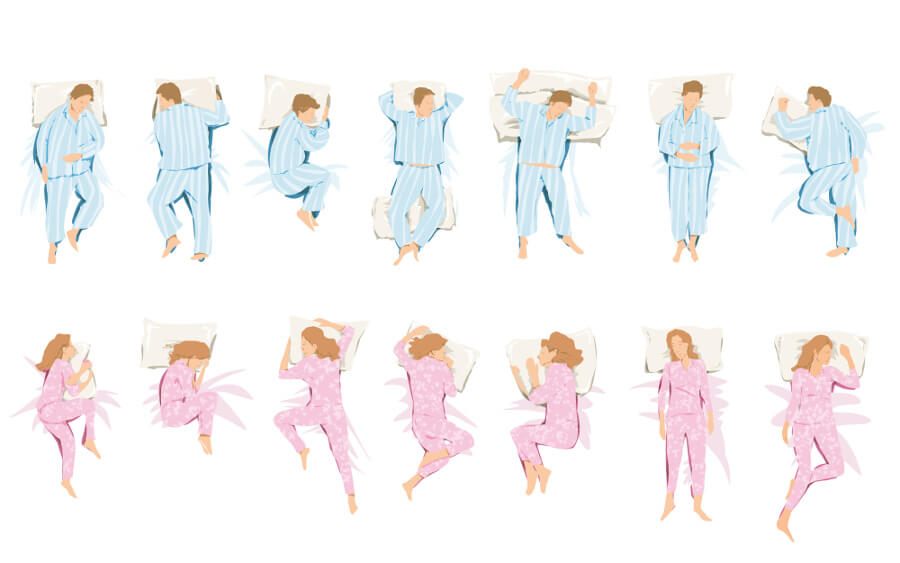 Sleeping Position, Personality Traits, and their Effect on Your Sleep

If you’ve ever slept alongside a snorer, you’ll know that when they are sleeping on their back, they are more likely to snore.

Prodding and poking snorers is usually an attempt to get them to turn onto their sides in the hope that the snoring will reduce. Frustratingly, although they might lay on their sides for a short time, they often roll back into their preferred back sleeping position and start snoring again within just a few minutes.

The differences in the way people sleep has fascinated scientists for a long time, and a number of scientific studies have been undertaken to identify whether there are any correlations between the way people choose to sleep and other aspects of their lives. For example, a recent British study looked at the link between sleeping positions and personality traits. This is an intriguing study for those exploring the field of snoring as it indicates that snorers may also share one of a couple of identifiable personality types.

If you sleep like a log, it doesn’t just mean that you got a great night’s sleep. People who snooze in the log position lay on their sides with their arms straight down by their sides. This sleeping position is correlated with being the life and soul of the party as log sleepers are usually sociable, trusting, and easy-going.

In the yearner position, the sleeper is on their side with their arms out in front of them as if to reach for something or someone. In daylight hours, yearners are complex, idealistic characters who combine open-mindedness with a certain level of cynicism and suspicion. They can be slow to reach decisions but will hold on stubbornly to it once made.

The fetal position is very common, especially among women, and is a slide position with the knees tucked up against the torso, rather like a baby in the womb. Sleeping in the fetal position is often associated with a desire for self-protection and comfort and fetal sleepers are often described as having a tough exterior which hides their inner vulnerability. They may be shy and stand-offish when you first meet them, but if you can get them to relax you’ll catch a glimpse of their fundamental warmth and good-humor. People who sleep like this also make great employees as they are often described as calm, conscientious, reliable, and dutiful.

The thinker is a variation on the fetal position where the sleeper usually places one hand so that it is next to their chin. Thinkers have similar personality traits to fetal sleepers but are prone to more emotional turmoil and mood swings.

A front sleeper lies on their front. Many who sleep in this position do not use a pillow, or, if they do, often hold it tightly or clutch it to their chest. Front sleeping rarely leads to snoring but can increase back and neck problems. Freefallers are usually thin-skinned extroverts who dislike being criticized and feel anxious in conflict situations.

If you sleep in the soldier position you typically lie on your back with your arms down by your side. This position is considered best for the back and joints but is one of the worst for contributing to snoring. Soldier sleepers are often described as rigid, disciplined, and emotionally reserved people who set high standards for themselves and others.

The starfish and stargazer positions are both also likely to lead to more snoring as in all back-sleeping positions the lower jaw is tilted backward restricting the airways. In the starfish position, the sleeper lies on their back with their arms splayed in any direction, taking up the majority of the sleeping space. In the stargazer position, the sleeper has their hands up to or behind their head and their elbows pointing outwards. If you sleep like a starfish or a stargazer, you’re likely to have a sunny disposition and be a great friend and good listener. You’ll enjoy helping others, but you’re likely to dislike situations that put you in the spotlight.

Changing your sleeping position is one of the ways that is frequently recommended to try and reduce snoring. However, although it seems like an easy solution, as our preferred sleeping positions are deeply embedded and linked to our personalities, it is more difficult to change your position than it might seem. If you do want to try, then it’s best to be prepared for it to take a long time to relearn a new way of sleeping.

Aids such as a body length pillow or a tennis ball sewed into the back of your pajamas can be really helpful as a constant gentle reminder to avoid back sleeping.