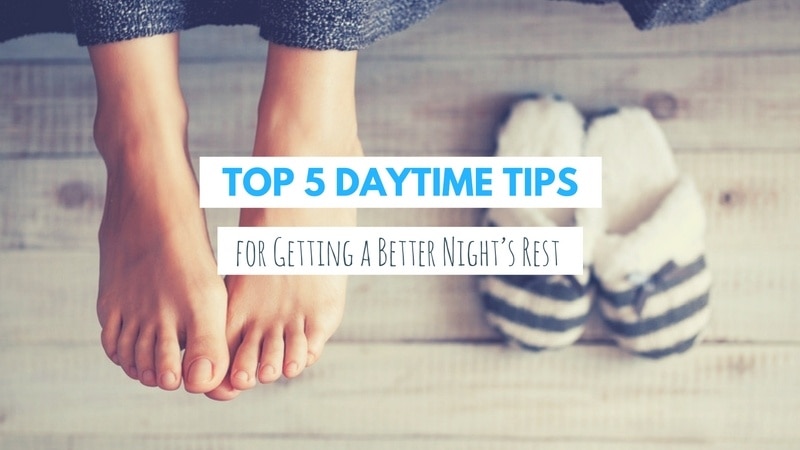 Daytime Tips for Getting a Better Night’s Rest

If you are one of the millions of people who are perpetually exhausted, but still unable to get high-quality sleep, you may want to first look at what is involved in your daily routine.  Oftentimes, our habits are to blame.

Here are a few tips for daytime lifestyle changes that may help alleviate some of those sleepless nights:

Getting the right amount of exercise is one of the biggest influencing factors in your body’s ability to rest.  In order to achieve this balance, though, you need to time it just right.  Whenever possible, try to squeeze physical activity into your morning routine, rather than waiting until the evening to hit the gym.  If you can’t avoid working out in the evenings, try to do it hours before you usually go to bed.  Exercise stimulates the mind and body, which can contribute to your sleeplessness if performed too close to bedtime.

It’s a very well-known fact that caffeine, tobacco, and other stimulants have a significant effect on the amount and quality of a person’s sleep. It’s important to remember that caffeine has a six-hour half-life, so it’s a relatively long-lasting substance.  Caffeine is also known to cause your body to release adrenaline, which not only affects your quality of sleep but also your emotional stability.  If your goal involves getting a better night’s rest, do yourself a favor, and avoid caffeine in the late afternoon and evening hours.

This is another well-known tip for improving your quality of sleep, but it continues to be a problem for many people (especially those who lack structure or activity during daytime hours).  It’s been said that short naps during the earlier hours of the day are harmless when balanced with a healthy amount of exercise.  However, longer naps can contribute to negative sleep habits, which often become progressively worse with time.

For some people, snoring is worse during a nap, and the snoring wakes up the snorer after just a few minutes, leaving the snorer tired and groggy.   If you must nap, wear an anti snoring mouthpiece such as Zyppah, or SnoreRx.

4. Create a to-do list, and leave it until morning.

For the more productive types, a seemingly endless list of things to do is often the culprit in nighttime wakefulness. Pay attention to your thoughts as you lay awake staring at your ceiling tonight. Is your head spinning with tasks and responsibilities and panic? If so, try writing tomorrow’s tasks down and commit to putting them out of mind until you’ve had a decent night’s rest.

Bedtime routines aren’t just for children.  In fact, the human mind is very receptive to ambiance, aroma, lighting, and other cues, so you may find that these subtle (but consistent) changes are just the thing you need in order to get a better night’s rest.  The first step, of course, is to set a regular bedtime for yourself and stick to it.

Getting a good night’s sleep is incredibly important to your overall health and wellness, so insomnia is not something that should be ignored.   If you are suffering from insomnia and have ruled out any serious underlying medical condition, it’s important that you begin looking at the countless other factors that affect your ability to rest.  Oftentimes, a few simple changes can make a world of difference.