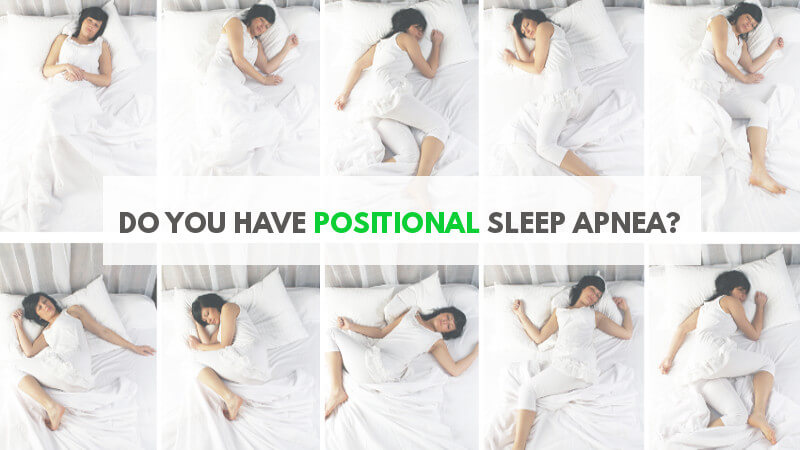 Do You Have Positional Sleep Apnea?

Sleep apnea is a medical condition that affects hundreds of thousands of people in the United States each year. This condition can lead to serious medical problems. As a result, understanding the symptoms of sleep apnea is necessary for improved quality of life.

Sleep apnea causes individuals to completely stop breathing or take very shallow breaths while they are asleep. Some patients find they only stop breathing once a night, but others can stop breathing multiple times a night, with extreme cases being ten times in one hour.  This condition often results in the individual waking up suddenly in the middle of the night, or snoring so loudly others around them are disturbed.

Other side effects of sleep apnea include the inability to fall asleep, exhaustion during the day, frequent mood changes due to lack of sleep, headaches, heavy snoring, and depression. However, this condition varies heavily from one person to the next.

Since snoring is a side effect of sleep apnea, it is recommended by doctors that snoring aids or SnoreRx be used only after sleep apnea has been ruled out.

Supine sleep is a position where the individual is lying on his or her back with both their chest and face turned upwards, whereas prone sleep refers to lying on the stomach with the face and torso down.

When patients find that choosing non-supine sleep results in a lowered apnea-hypopnea index by 50% or more, they have positional obstructive sleep apnea. According to RTSleepWorld “Positional OSA is a type of OSA in which the Apnea/Hypopnea Index (AHI) is twice as great in the supine position compared to non-supine sleep”.

More simply put, positional sleep apnea occurs when patients do not sleep on their backs and find vast improvement in their breathing and overall quality of sleep.

The ultimate solution to eliminating positional obstructive sleep apnea is positional therapy. This is a simple solution that does not require the assistance of surgeries or machines, making it much more affordable as well as easy to implement for the average user.

The goal of positional therapy is to distinguish when decreased or stalled breathing starts to occur, and tell the body to change sleeping positions without waking the patient and causing similar sleep disturbances.

Snoring apps are becoming an increasingly popular tool. They come in many different styles and are accessible on mobile phones, often formatted for both Android and Apple devices. These apps are valuable for individuals with sleep apnea because they can begin to understand and identify their snoring patterns, and can also help those who believe they may have sleep apnea diagnose and track their symptoms.

If you are interested in your snoring patterns during a particular time of night, you can use the clock face displayed on the screen and skip to a specific hour. Apps like SnoreClock help users with positional sleep apnea to begin positional therapy and to understand the times of night they snore the loudest as well as the percentage and duration of the night they are snoring.

Positional sleeping devices are relatively new to the marketplace, but their popularity continues to grow. These devices either make it uncomfortable to naturally sleep in the supine position, or gently alert the body that it needs to shift positions.

SlumberBump has developed a Sleep Position Trainer, which straps around the back of the user.  The air tube on the trainer can inflate to the desired size.  When the user tries to roll on the back, the device is so large that the user is unable to do so.   This guarantees that users sleep on the side and stomach all night.

Sleep apnea is a medical condition that causes a lapse in breathing and is often a result of sleeping on the back.  Positional therapy helps patients adjust their sleeping patterns accordingly.

Positional sleep devices and using a sleep app are excellent examples of snoring aids because they are cost effective, allow the user to continue sleeping, and do not require any medical procedures. Monitor all sleeping habits and know the signs of sleep apnea to be effectively protected and healthy while sleeping.