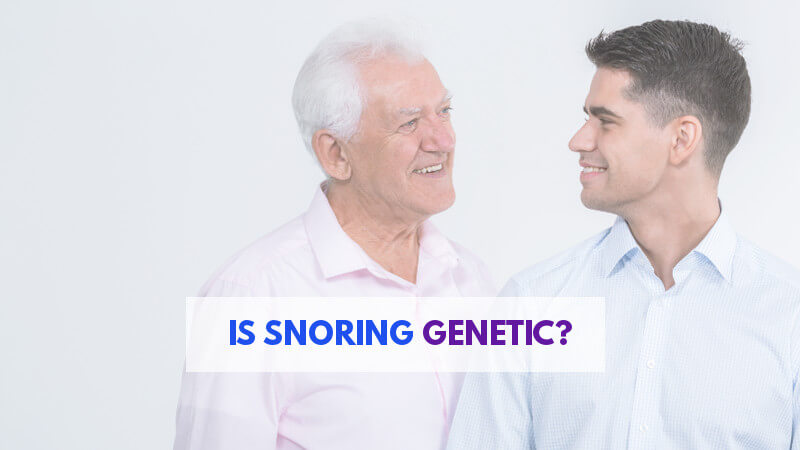 We inherit so much from our parents (and ancestors) including facial structure, hair color, and body type.  Even behavior and personality is influenced by our genes.  However, our genes are not our destiny—they just influence.  For example, a person with a family history of heart conditions is not guaranteed to have a heart condition—but the probability is higher. Likewise, snoring may have some genetic connections.

The more we know about our genetic background, the more we can adjust our lives to avoid lurking problems.

Most people snore from time-to-time. It occurs more often in men and the overweight.  Occasional snoring is not a problem.

If snoring is habitual, significant health problems may present themselves. One of the more common ones is obstructive sleep apnea (OSA).

Risk factors for OSA include some which may be genetically influenced, including

While not directly or necessarily fatal, OSA leads to several problems, including

There’s no gene for snoring, as far as we know in 2017. As noted previously, some of the risk factors for OSA have a genetic component. Since snoring is a significant symptom of OSA, those factors provide a genetic influence on whether a person is a snorer.

Some people come from families of snorers, even if no sleep apnea is present. One study reported a strong connection between a blood type, family history, and habitual snoring. Another found that self-reported incidence of daytime sleepiness and snoring had a genetic basis largely separable from genes connected with obesity.

Narrower air passages or obesity may also run in families. If you come from a family of snorers, your risk of being a snorer is increased by 300%.

Some genes directly cause obesity through one of the several disorders. Absent those disorders, genes in combination with behavior may lead to obesity. Both are needed.

Obesity runs in families, as shown through studies of families and identical twins. Possessing the genes, however, is insufficient to produce obesity. These genes do, however, increase susceptibility to environmental factors which promote obesity.

One of those factors, at least for most people in the U.S., is the abundance of food. Food is available almost everywhere at any time. People, simply put, eat (and drink) too much, and this abundance, plus possession of a gene or genes connected with obesity can lead to obesity.

This risk increases when coupled with the decrease in activity levels throughout life, including work, domestic, and leisure time.

Being male or having a thick neck are two factors which are largely genetic. Most people have little control over these aspects of their genetic makeup. Narrowed airways, which are affected by genetics during developing, also are out of an individual’s control.

No one can change his or her parents; we are stuck with our genes. We can, however, control the environmental factors which connect with genetic traits, including those for obesity. If we can limit those effects, then the genetic connection to snoring can also be limited.

A few lifestyle changes can lead to a lessening of snoring, no matter what the genetic contribution is. Genes are not destiny; act to be in control yourself.