So Long CPAP: How the slumberBUMP Helps End Snoring
Are you a Candidate for a Home Sleep Study?
Who Invented the CPAP?
Mouth And Throat Exercises that Cure Sleep Apnea
Do You Have Positional Sleep Apnea? 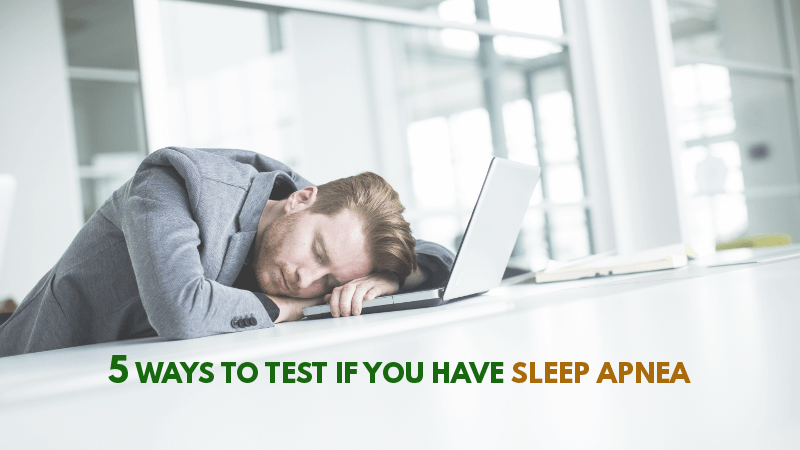 5 Ways To Test If You Have Sleep Apnea

Sleep apnea is one of the most common sleep disorders, and currently affects more than 18 million adults in the U.S. This condition is characterized by pauses in a person’s breathing over the course of the night, and may even cause them to stop breathing altogether for short periods.

Scientists have identified three types of sleep apnea: Central sleep apnea (CSA), caused by signaling failure between the brain and the respiratory system, obstructive sleep apnea (OSA), which is caused by a physical blockage in the upper airways and often a result of being overweight, and mixed sleep apnea, which is a combination of the two.

Often consumers snore and then stop the snoring with a SnoreRx or Good Morning Snore Solution.   But ideally, a sleep study should be performed through a trained sleep doctor first to determine the cause of snoring.

When left untreated, sleep apnea can disrupt the sleeping pattern, leading to fatigue, irritability, headaches, tiredness in the day, mood swings, depression, and problems with memory and concentration. Severe sleep apnea symptoms that persist for a long period of time can lead to serious health complications down the line, as it increases the risk of cardiovascular disease because of high blood pressure.

Despite the health risks associated with sleep apnea, as many as 80% of cases remain undiagnosed and untreated. If you suspect you may have sleep apnea, seeking treatment can be beneficial in improving your quality of sleep, and in preventing a wide range of health complaints. Here are five ways to determine whether you have sleep apnea.

One of the most common symptoms of sleep apnea is loud, persistent snoring that is unaffected by other factors, such as alcohol consumption or nasal congestion during a cold. This snoring is because sleep apnea is frequently caused by blockages in the throat, usually because of soft tissue collapsing into the airways, where it vibrates as you breathe. Other warning signs are choking or gasping sounds during sleep, which are a result of interrupted breathing. Finding out how badly you snore is usually just a matter of asking others in your household, but if you live alone, monitoring apps can be used to record your breathing as you sleep. Many of these apps will even give a readout of sounds recorded throughout the night in the form of a graph, making it easy to find out the volume and regularity of your snoring over time.

If you frequently wake up feeling tired and unrested despite having slept for eight hours, this may be caused by sleep apnea disrupting your sleep and reducing your quality of sleep. Feeling constantly tired throughout the day, having difficulty waking up in the mornings, and even needing to take naps to alleviate drowsiness, can be big indicators of sleep apnea, particularly if you are going to bed at a reasonable time.

Frequently waking up with one or more of these symptoms is a key indicator for sleep apnea. People with this condition usually sleep with their mouths open, as they struggle to breathe throughout the night. This open mouth dries out the mouth and throat, resulting in soreness the following morning. Headaches can occur because of oxygen deprivation to the brain throughout the night, which is common in those with interrupted breathing. These headaches are because low oxygen levels stimulate the widening of blood vessels in the brain, to increase the flow of oxygen, which can cause a vascular headache the following day.

If you are frequently in a bad mood, this may also be a result of an interrupted sleep cycle. Everyone experiences bouts of depression and irritability, but if yours is persistent and not caused by any obvious life stresses, it could be a symptom of sleep apnea. If these periods of irritability coincide with one or more of the other symptoms on this list, it could be poor quality sleep that is affecting your mood.

If you think you have all the signs and symptoms of an individual suffering from sleep apnea, it is advisable to visit a doctor so you can discuss treatment options. Here they may perform a polysomnogram, which is a definitive test for sleep apnea that records specific physical activities while you sleep. This test is an overnight study that involves being attached to monitoring equipment via surface electrodes, which will record electrical activity produced by your brain and muscle tissues. This equipment then records the data digitally for interpretation by a doctor the following morning and can be used to determine whether you are suffering from sleep apnea.

Sleep apnea is a common, but easily treatable, disorder. Once you have determined whether you have the condition, seeking an effective solution is often simple and inexpensive. This fix can be as easy as changing your sleeping position, using specialized pillows to hold your head at a different angle, or losing weight.